Awareness, and to Stop Child Sexual Abuse and Child Abuse, committed by the catholic church, nuns and priest and other Denomination Worldwide
Please be advised that some may find stories here Highly Uncomfortable & Upsetting to read.
" You shall Know the Truth and the Truth Will Set You Free.”

A disgraced former Catholic priest from Hamilton has died suddenly in Australia. An obituary notice published in the New Zealand Herald said James Joseph Cunneen "suffered a heart attack and passed away suddenly" in the intensive care unit at Blacktown Hospital in Sydney. He died on December 28 last year.

France: 19-year-old abused by Church priest charged for ramming a crucifix down the pedophile’s throat and murdering him

The priest was the subject of a church investigation shortly before his death. The inquiry was dropped after he died, with no report ever being sent to Rome, according to Franceinfo. The outlet also noted that three people had contacted the local bishop's office with information regarding abuse by the priest since July 2018.

Pope Francis has abolished the “pontifical secret” mechanism that has been invoked in clergy sexual abuse cases, following criticism that the confidential code has been used to protect pedophiles in the Roman Catholic church. In a document published Tuesday, Francis ruled that information in abuse cases will still be be protected by church leaders, but that the “pontifical secret” no longer applies to abuse-related accusations and trials.

One day in May of 1970, an 11-year-old boy and his disabled sister were sitting on the curb outside a Chicago tavern, waiting for their mother to come out. When a priest with crinkly eyes and a ready smile happened by and offered the family a ride home, they could not have been happier.

Complete rankings for religion headlines and religion newsmakers appear below:

An expose by the Houston Chronicle that revealed hundreds of victims of abuse in the Southern Baptist Convention and that spurred calls for the SBC to investigate churches was chosen as the top religion story of 2019 by members of the Religion News Association in its annual Top 10 Religion Stories and Newsmaker of the Year Poll.

THE Queensland Government has tabled amendments to the criminal code that would require priests to violate the sacramental seal of confession when penitents confessed child abuse, or risk facing three years’ imprisonment. The proposed amendments, which were tabled in response to Royal Commission recommendations on November 27, reflected similar legislation adopted in Victoria in August.

A move to compel Queensland priests to report child sexual abuse offences disclosed during confessions would fail to make children safer, Brisbane's Catholic archbishop says. Mark Coleridge is opposing a state government plan to legislate against the sanctity of the confessional as an excuse, defence or privilege.

A defrocked French Catholic priest accused of sexually abusing dozens of boy scouts decades ago told his trial on Wednesday that he himself had suffered similar assaults in his youth, in an unexpected twist to his defence. After confessing in court on Tuesday to "caresses" he knew were forbidden, after victims testified to the horrors they suffered, Bernard Preynat, 74, faulted the church for failing to help him deal with his own urges

Pennsylvania judge has ruled that parents of children in the Roman Catholic Church and survivors of sexual abuse by clergy members can move forward with a lawsuit against the Diocese of Pittsburgh alleging that it has not fulfilled its obligations under state law to report child sexual abusers.

Catholic priest dies before being sentenced for child sexual abuse

Disgraced former Catholic Priest James Joseph Cunneen, who was found guilty of indecent assault against six teenage boys in New South Wales in the late 1980s, has died before he could be sentenced. 60-year old Mr Cunneen was due to be sentenced in Downing Centre District Court on 14 February 2020. 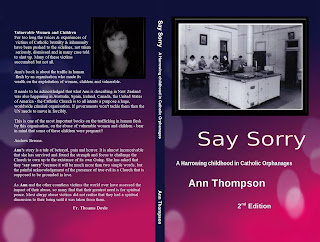 I know some people do not like the way I wrote my story... Child like they say... Please remember one thing which I am so ashamed of... I found it very hard to write about what happened to me at the two catholic church orphanages... I was not educated... to tell you the truth my body and mind were so damage... that I forgot what I had read after two lines... I could not remember anything... I still get violent headaches everyday... and I can not sleep at night... because of the nightmares I have... Please forgive me for the mistakes I have made in my books... I did them all myself the covers and the layout of my books... I wanted to prove to myself that I could do something... The only thing I am guilty of is telling the TRUTH... Ann Free Spirit = Ann Thompson

Altar boys say they were abused by priests at the Vatican

Former altar boys have claimed they were molested by priests inside the Vatican, as a lingering scandal surrounding widespread abuse in the Catholic Church erupts at its headquarters once again. Several anonymous former altar boys at the Vatican’s youth seminary alleged at least two priests kissed and fondled three of them in the Nineties.

The fresh allegations come just months after Catholic leaders had gathered for an unprecedented summit at the Vatican to tackle widespread paedophilia within the church. At the close of the summit in February, Pope Francis promised the church would "spare no effort" in bringing abusers to justice and would not cover up or underestimate abuse.